Job submission controller uses 512Mb memory at most by default. Under this setting, it can record around 50 thousand job history. Please delete some old phjob records if you found phjob records are near 50 thousand. Otherwise, it will run out of memory and cannot work appropriately.

If you want to record more job history, please increase/add the memory setting in helm_override/primehub.yaml, for example:

A custom resource PhJob is defined for PrimeHub-defined job. The job is very similar to the kubernetes native job, the controller would spawn a pod for the job's spec. The difference is that the spec contains the PrimeHub-specific concept, like group, image, instance type.

Here is an example of PhJob. 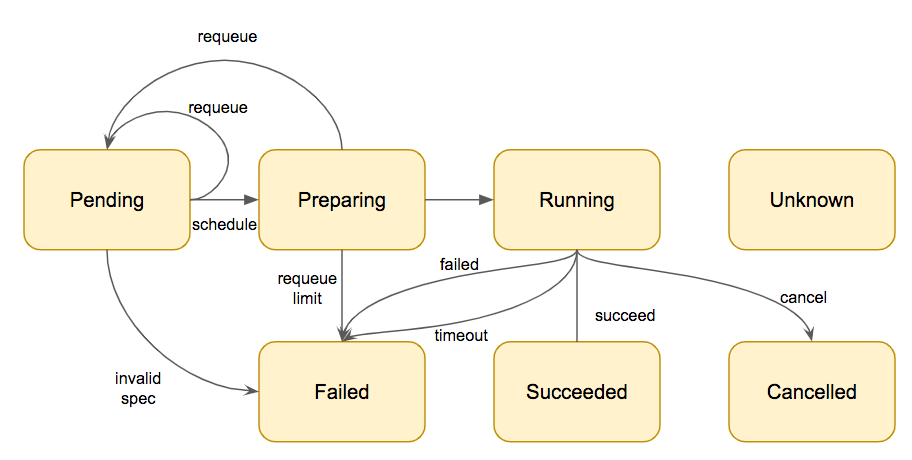 There are 6 states for the PhJob

Unlike kubernetes' job, PhJob is scheduled by the controller rather than the scheduler. And only when the resource is ready is the pod created. Here is the basic principle for scheduling

Here are some examples of the scheduling behavior.

There are three jobs submitted to the same group phusers. Assume that the group setting is

And the job specs are

Job B is blocked because of no enough GPU. Job C is blocked by job B because the job is scheduled by FIFO.

The same as example 1, there are three jobs submitted to the same group phusers. And the group setting is also

The job specs are

The only difference is the job B is also submitted by bob. The result is

After a job is scheduled, the underlying pod is created. However, according to the pod lifecycle design, a pod does not run immediately until the job is assigned to a node and the containers are initiated. If a pod cannot reach to running state for a given time (default 3 minutes), the job is pushed back from preparing state to pending state and wait for next scheduling.

Here describe what the underlying pod would look like. The pod is generated according to the selected group, image, and instance type. It determines what image to use, how many resources to request, and how many volumes should be mounted.

The primary volumes and locations are

The working directory is mounted as an emptyDir so that users can put temporary data under the folder.

There are these environment variables defined in the running jobs.

To prevent the job from running a too long time, there is a default timeout 1 day. The timeout can be configured by

A job can be canceled in the non-final state. To cancel a job, just set the PhJob .spec.cancel to true. If a job is canceled, the underlying pod is deleted.

A pod is a heavy resource for these two reasons

Even though the container is terminated, these two resources are not released until the pod is deleted.

To make the operator easier to reclaim the resources, we can configure the TTL of Pods. The default value is 7 days. This can also be configured by

The working directory is mounted to a emptyDir volume. By default, the capacity is 5Gb. The default value can be changed by the helm value.jobSubmission.workingDirSize

It is desired to limit the job only run on a specific node. We can configure the default nodeSelector, affinity, tolerations for created pod.

It is a known issue that there might be some performance issues when phjob has more than 10 thousand records. For example, the job submission page or jupyter spawner page takes a longer time to respond. If you notice this situation, please try to delete old phjob records and see if it alleviates the situation.

Q: Can one group run more than one jobs at the same time?

Yes. If the job have not reached the user quota and group quota

Q: Why jobs are not run in the right order?

Q: Why are all my jobs stuck in the preparing state?

This is because the pod cannot be initiated for some reason. Please ask the operator to see what happens to the underlying pod. One common reason is the cluster has no enough resources for this pod.

Q: Does a job enter preparing state only when the cluster has enough resources?

No. The only criteria if a job enters the preparing state are if there are enough user and group quota. That is, it is still possible that the pod cannot be scheduled because no node can fit the submitted job.

Yes. But currently, we only allow users to delete a job from kubectl. The command is

As the phjob is deleted, the underlying pod is deleted as well.

From the UI, the log is retrieved in the same way of kubectl -n hub logs <podname>. So if you cannot see the log, the reason could be

If a job is canceled or timeout, the log cannot be retrieved because the underlying pod is deleted. This is the current limitation and we hope we can preserve the log in the future.

Q: What happens if my job runs on a lost node?

If a pod is running on a lost node (which shows NotReady status on the kubectl get nodes), the pod status will change to Unknown status in 5 minutes. At this moment, the job is still in the Running state. However, the job detail pages may show the following message and the log cannot show correctly.

It should be noted that the resources for this job are not released.

What we can do is